POINTE TO THE EAST: A VILLAGE RE-INVENTS ITSELF 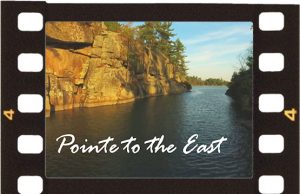 PaB Community Center Library – The video may be viewed on the computer in the library.  It is about 4 GB in size.

To purchase – Some physical copies of Pointe to the East are still available (on USB flashdrives).  Contact Elsie at 705-366-2050 to purchase.  You’ll want a copy for yourself and your friends, and anyone else lucky enough to have experienced the magic and majesty of Pointe au Baril!

A full description of the video can be found below…following the sampling of excellent reviews.

The reviews are in and hugely positive!   Here’s what some had to say:

I just finished watching Pointe to the East. ABSOLUTELY FANTASTIC! There are very few videos that keep my interest anymore, but I was just riveted to this.  So, so, so, so, well done!!!  Kudos to everyone involved in the creation of this!! – Ian Mead

This video really told the reasons why the community began, grew, moved and expanded. The film was professionally done but really kept the small town feel with interviews of long-time residents, bringing a lot of old memories to mind! So proud of the committee members who started with a simple idea and ended with a very professional film, wonderful job. Well done. – Joan Emery

Wow what a great job all of you have done on this. PAB now has its own movie and something to be very proud of. I brought my dad and his brothers to the preview and they all loved it. – Randy Gardner

It was fabulous! I bought 4 copies. I could pause it and take a closer look at some of the pictures. Incredible job! – Kathleen Kidd

I purchased the USB stick that featured the documentary. What was so amazing, being able to watch it the second time, is that I could pause and examine the many photos for as long as I wished. This often lead to lengthy conversations with others watching it with me, especially those who were born and raised in PAB. – Jane Kydd

The worst I heard was that it was incredible and it went up from there!

POINTE TO THE EAST – DESCRIPTION

Pointe au Baril’s long history and unique development is recounted in this 58-minute documentary.  It weaves interviews, video, photos, and narrative to recount the village’s early beginnings at its famed lighthouse on the rocky shores of Georgian Bay and its move to its present location 11 kms to the east. The video tells the story of how people, natural resources, and transportation all influenced its origins and development. As resources changed, Pointe au Baril did not become a ghost town like so many towns have. Instead, it moved and reinvented itself as a thriving host and supply centre for the thousands of island residents whose families helped to build and shape this town and its spectacular environment.

Pointe to the East is a special project undertaken to mark Canada’s 150th birthday. A special thanks goes out to the many volunteers who told us their stories and provided more than 2,300 photos, hundreds of which form the core of the video, and to our sponsors whose generosity helped to make this project possible.

Special thanks to the Township of the Archipelago